Friday the 13th is a slasher film series about the undead, immortal serial killer, Jason Voorhees. This has an extremely high body count, much higher than most other slashers. Jason himself dies on a few occasions, but returns on most of them.

Before the films Edit

The killer here is not Jason Voorhees, but rather his mother. It is not until the second movie that he begins his actual body count.

The killer in this movie is not Jason Voorhees, but Roy Burns, who is acting as an impostor Jason to kill everyone as revenge for his son's death - although his son's murderer was arrested, and Victor J. Fadan was never killed by Roy, thus all his victims were completely uninvolved.

Though the ending implies that Tommy kills Pam, other sources report that she returned him to his senses.

Between A New Beginning and Jason Lives Edit

Between Jason Takes Manhattan and The Final Friday Edit

Five unnamed victims were said to be killed in cold blood by Jason after he killed the coroner and FBI agents in cold blood. Creighton Duke was crushed in a bear hug by Jason, but director Adam Marcus confirmed that he survived, as he planned making a spin-off movie about him.

Though this film was released after Jason X, it takes place before, as Jason X is set in the future, and it was made first because Freddy vs. Jason was stuck in development hell.

It is possible that Clay Miller may have survived while Jason apparently killed Whitney somehow. 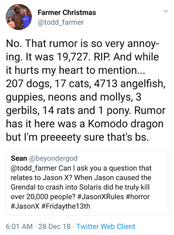 Solaris Explosion
Add a photo to this gallery
Retrieved from "https://listofdeaths.fandom.com/wiki/Friday_the_13th?oldid=40866"
Community content is available under CC-BY-SA unless otherwise noted.